One Day We Shall All be Telepaths 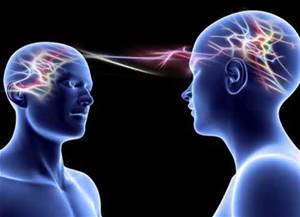 In the far future, when the planet Earth has reached a higher state of consciousness, humans shall all communicate mind to mind.

Telepathy – Will it Someday be Possible?

I was reading The Mediums Book, by Allan Kardec, and came across the topic of telepathy.

(58) Could two people at a distance from each other, by reciprocally evoking one another,

transmit their thoughts, and thus correspond together?

“Yes; and this human telepathy will one day be the universal method of correspondence.”

Why cannot it be practiced now?

“It might be, by some people, but not by all. Men must be pure in order for their spirits to disengage themselves from matter; and, until the human race has reached a higher degree of advancement, this power will be confined to a few pure and dematerialized souls, such as are rarely found among the inhabitants of the earth in its present state.”

Before, reading this, I had thought that only spirits could communicate by thought. It now appears that even in a physical state, at some future time, we will be able to be telepathic.

The spirit world is pushing us to become a Regenerative world, where good spirits dominate, and life is unencumbered by selfishness and envy. However, I believe the age of Telepathy will most probably come when the earth reaches the next plateau, a Happy world. What is a Happy world?

Where good outweighs evil. On Happy Worlds, we still retain our human form, although the senses are more acute. The body changes, as described in The Gospel According to Spiritism, “The specific lightness of the body enables rapid and easy locomotion; instead of dragging itself laboriously over the ground, it glides – so to speak – over the surface or sails through the air with no other effort than that of the will, in the way in which angels are portrayed.” With the improvement in our bodies, the years of infancy and adolescent are shorter, while the average lifespan is much longer than on earth today.

We shall eventually become our vision of a superior alien race, where we exhibit semi-god like qualities, all it will take will be countless millennia.

To understand the spirit realm more and where will we all eventually ascend to, read my book, Explore Your Destiny – Since Your Life’s Path is (mostly) Predestined.